RISC-V is a new Instruction Set Architecture originated at UC Berkeley. I've always been interested in RISC-V development thanks to its open nature. However, apart from its usage as a MCU (such as Longan Nano or PineCone) or an FPGA board (such as VexRiscv), there is not much consumer-oriented hardware capable of running Linux.1 That was until SiFive announced HiFive Unmatched.2

I ordered HiFive Unmatched on Mouser Japan on November 12, 2020. After few delays due to change in board component and silicon shortage.3 The board finally arrived on May 28, 2021. 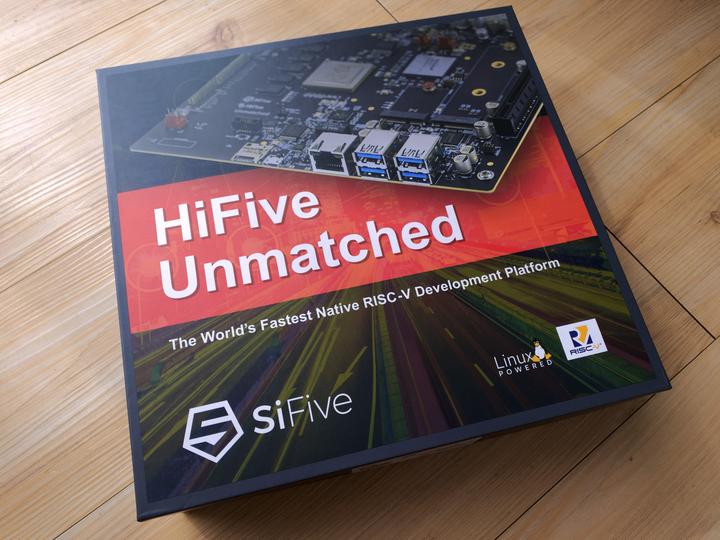 HiFive Unmatched is not a System on a Chip in the same manner as Raspberry Pi or other ARM boards. HiFive Unmatched is a Micro-ITX board and required external components such as GPU (via PCIe 3.0 x8), a power supply and a CR1220 battery. However, the board also come with USB serial console (using FTDI FT2232HL), allowing its serial console to be accessed by plugging in a USB to Micro-USB cable between a computer and the board. 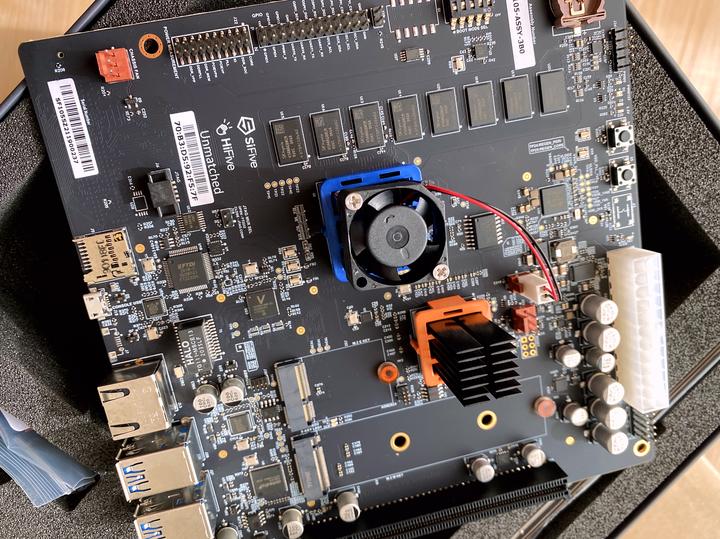 I chose the following components into building the board:

Buying these components ballooned the price quite a bit. But it's okay. For science.

Despite SiFive's recommendation of using Radeon RX 500 series ("Polaris") for graphic card, I decided to try out Radeon RX 5700 XT ("Navi") instead as I have a couple of them lying around. They were a leftover of when I was still doing VFIO. Newer Radeon cards has its driver included in Linux kernel tree (amdgpu) and supposed to support even the latest cards so I thought it might work.

However, even though the kernel was able to detected the GPU and initialized the driver, the card failed to output anything meaningful. After some inspection, it appears the card is stuck in PCIe 3.0 x16 bandwidth despite the board only has PCIe 3.0 x8. The fact HiFive Unmatched is using PCIe 3.0 x8 with a PCIe 3.0 x16 slot might be one of the reasons.

Unable to solve the issue with RX 5700 XT card, I decided to balloon the budget even further by purchasing Radeon RX 560 4 GB from a second-hand market. The price was reasonable and shipment was fast. I received Radeon RX 560 4 GB the following day and the board now has proper video output!

The first thing I noticed after assembling the board was the loud noise from the fan. HiFive Unmatched shipped with a 25×10 mm 3.5 CFM fan on a 25 mm heatsink. Measured noise on the system in a case was 45 dB, which was too high given the plan was to leave the machine running 24×7 next to my bed.4

It was not until u/a4lg's post on Reddit about their experience in replacing the fan with a 40 mm variant which inspired me into doing the same. I ordered Noctua NF-A4×10 FLX and began inspecting into how to mount the fan. To my surprise, the fan on CPU was held by screw in the gap between heatsink fins, which doesn't seems too secure.

I proceed to design a 3D printed mount for the fan, with a goal to not require any screws as there's no place to mount them on the heatsink. The first design was a loft which direct the air from 40 mm fan into 25 mm heatsink: 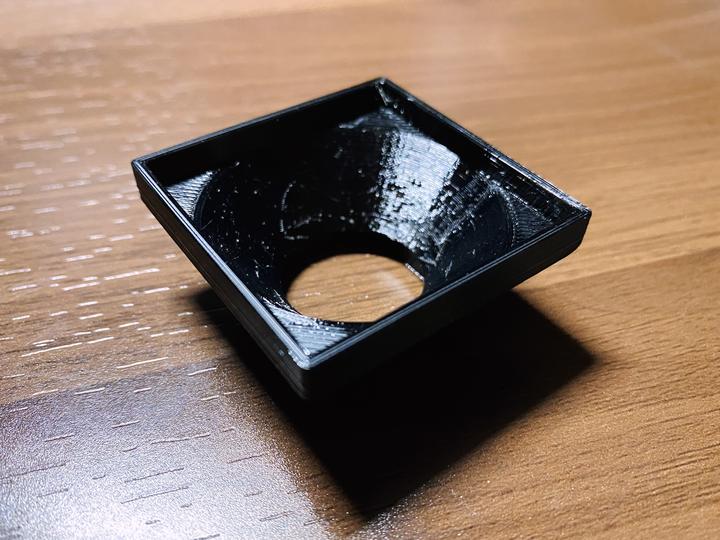 This design doesn't really work: it pushed the fan too far from the heatsink to work efficiently. The temperature quickly raises about what I would considered comfortable leaving the machine running overnight. The second version of the design was a simple slab to put 40 mm fan on top of the heatsink: 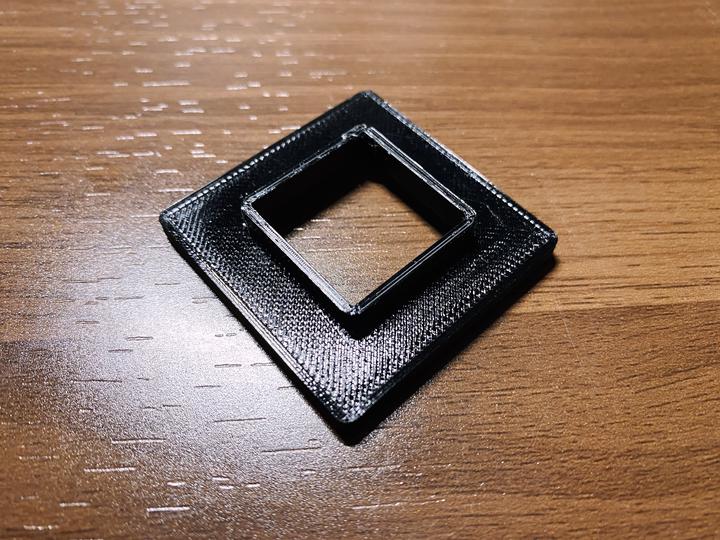 The resulting temperature was not as good as the stock 3.5 CFM fan, but the noise level is now around 30 dB. Adding Noctua NF-A12×25 PWM to the case as an intake5 helped reducing the temperature even further while staying at the similar noise level. My HiFive Unmatched is now ready for running overnight next to my bed.

I posted the HiFive Unmatched 40 mm Fan Heatsink Mount STL file on Thingiverse, hoping it would help others with a similar problem. I plan to improve the design in the future.

Now I've got the machine capable of running 24×7, it's time to try to port my favorite Linux distro, Void Linux into running on this board. As of this writing, I've got the basic system running based on an existing PR and a lot of help from #voidlinux IRC channel. I hope to write about the porting process in the future! 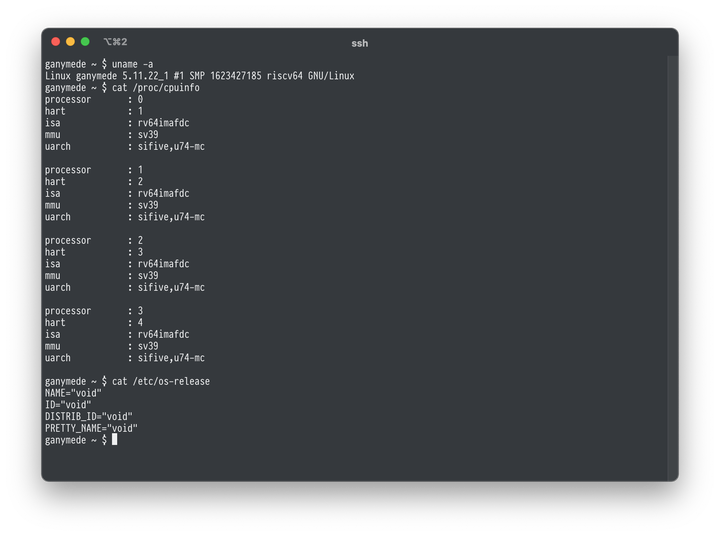